Our client had lived in this beautiful home when she was a child. Her father had purchased the property from the council. They previously used it as a local building for registering births and deaths. It was in a very poor state of repair, but he was an architect, and began the first phase of the restoration.

He completed an initial phase of work to create a home for his family, but sadly never managed to realise his dream of fully restoring the property. Many decades later, our client picked up the mantle and we were brought in to help take the project through to completion. 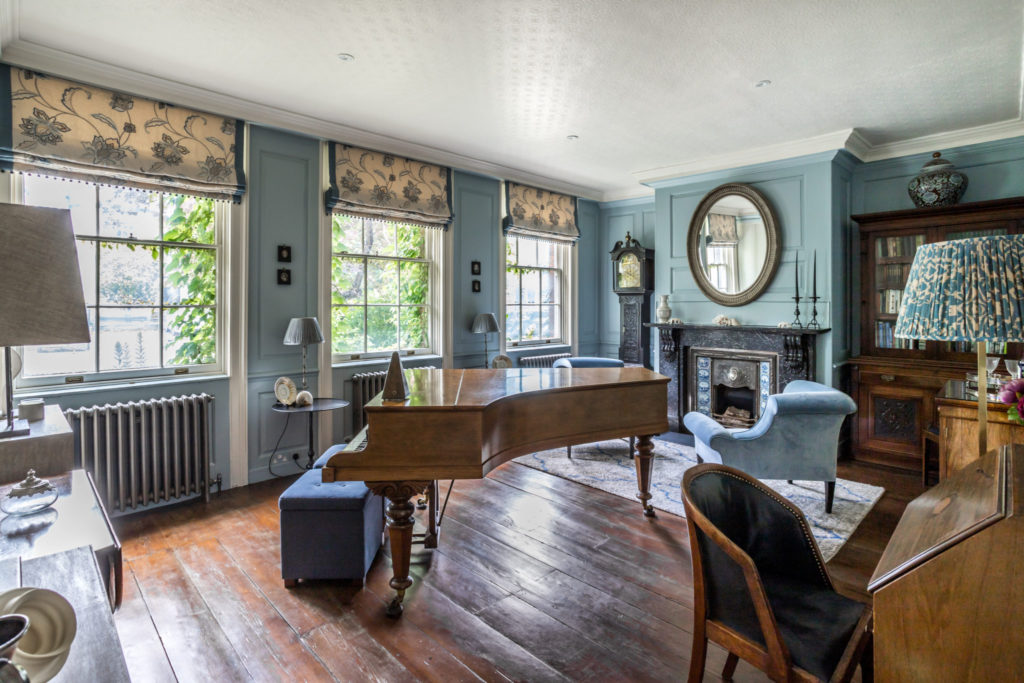 At first sight it was an overwhelming project. It took our client a year of careful decluttering, sorting and reorganisation before it was ready for design work to begin. This gave us time to really get to know the house and our client, schedule the phases of work, design the interiors and source the best trades and products before we fully embarked on the implementation.

This large drawing room was a very unattractive shade of acid green with a dirty old carpet. When we lifted the carpet we were delighted to discover that the original flooring was still in tact underneath. Our first step was to have it restored to it’s former glory.

We then went on to repair, reseal and repaint the panelling, in this beautiful shade of blue. You will notice that blue and silver, is the chosen colour palette, that now flows throughout the home.

The ceiling had been decorated in anaglypta wall-covering and although it wasn’t original we left it in place as it protected the ceiling and is in-keeping with this quirky period property. 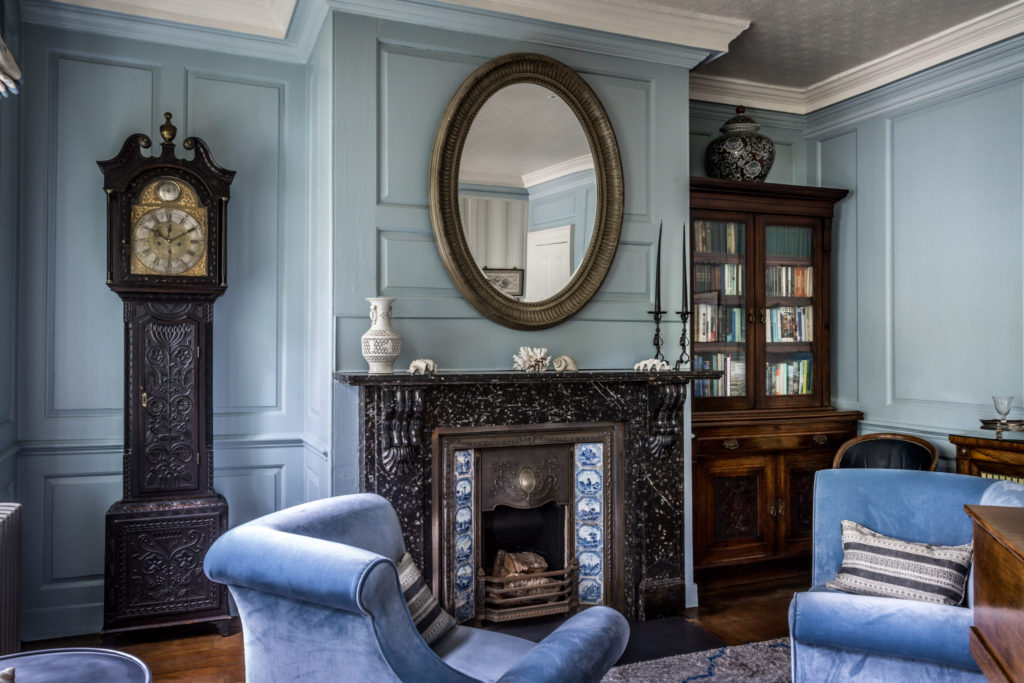 These chairs are replicas of an Edwin Lutyens design. Our client is a great fan of this extraordinary British architect and we were delighted to find that his grand-daughter has a company creating replica Lutyens designs. Much of the rest of the furniture was existing and so the requirement was focussed on finding the best layout to allow each piece the space it deserved and ensure that would the room would not feel cluttered.

The colour scheme brings out the detailing in the tiles, highlighting the beautiful fireplace, that had been restored earlier.

The greatest challenge was the positioning of the grand piano. We decided to give it centre stage in the middle of the room. Old photographs showed that this was where it had been placed previously and it works perfectly. 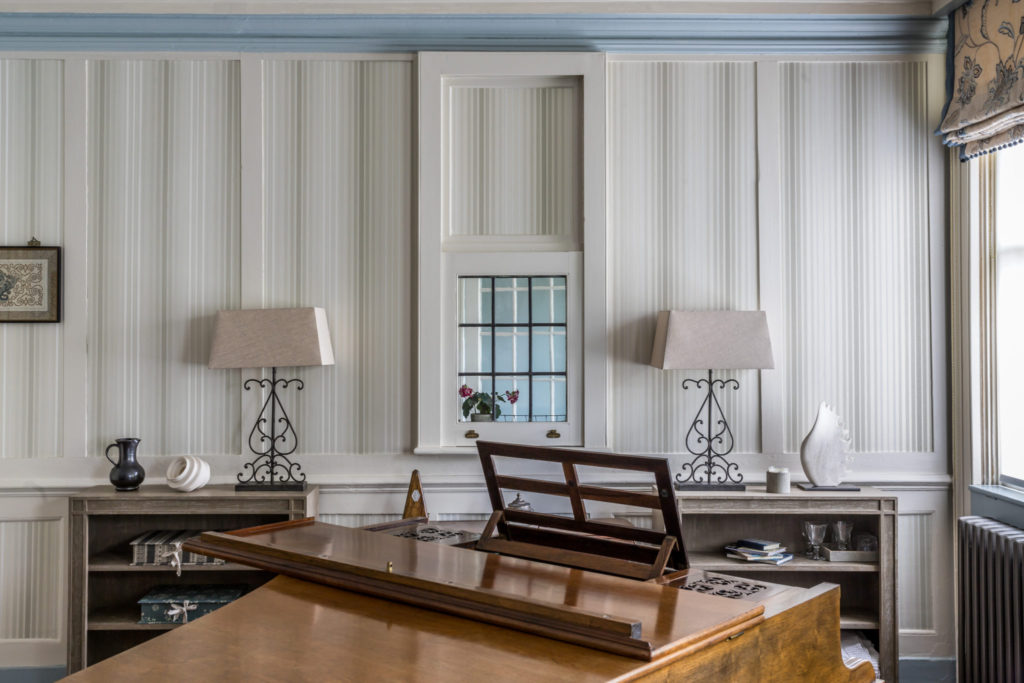 There are many eclectic elements throughout the home. For example, this is little interior window that looks out onto the hall is one of many quirky aspects we retained. “Customers” would stand here when they visited the council to register their births and deaths.

This panelling is quite different from the panelling in the rest of the room but was also existing. We chose a striped wallpaper working with the vertical, linear design. 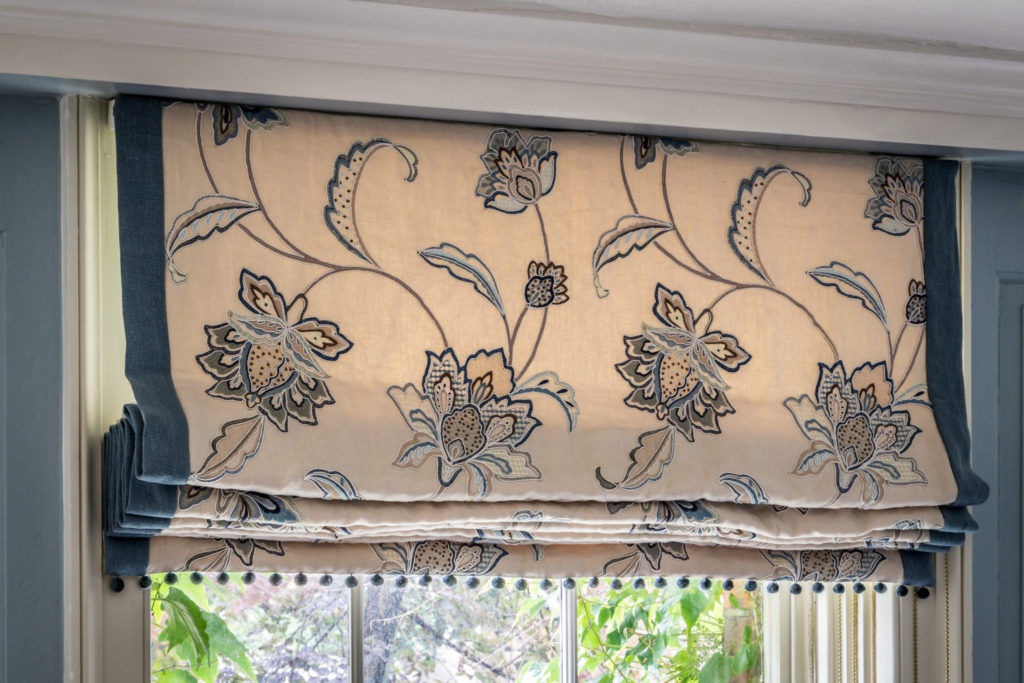 The windows here are at the front of the house and overlook the busy main road. So, we tucked privacy blinds underneath the Roman Blinds. They can be pulled down when needed, without blocking out the light. Beautiful fabrics were chosen and bespoke soft furnishings made throughout. 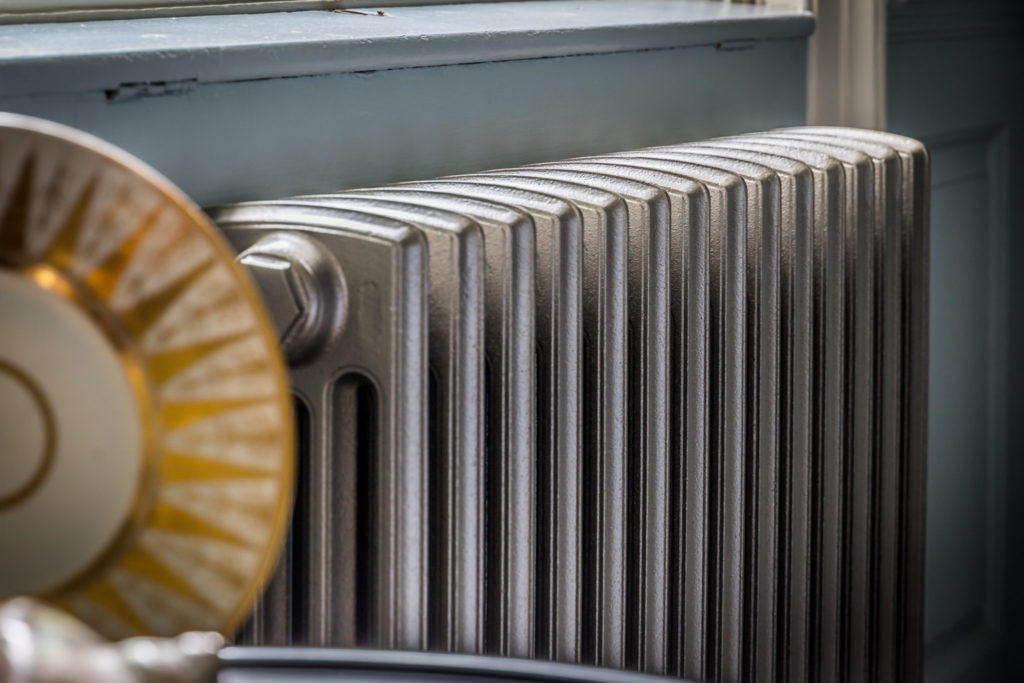 The heating system was very old and inadequate. We replaced the boiler and installed beautiful cast iron radiators. Custom-made by Castrad, these were chosen for their quality and finish. 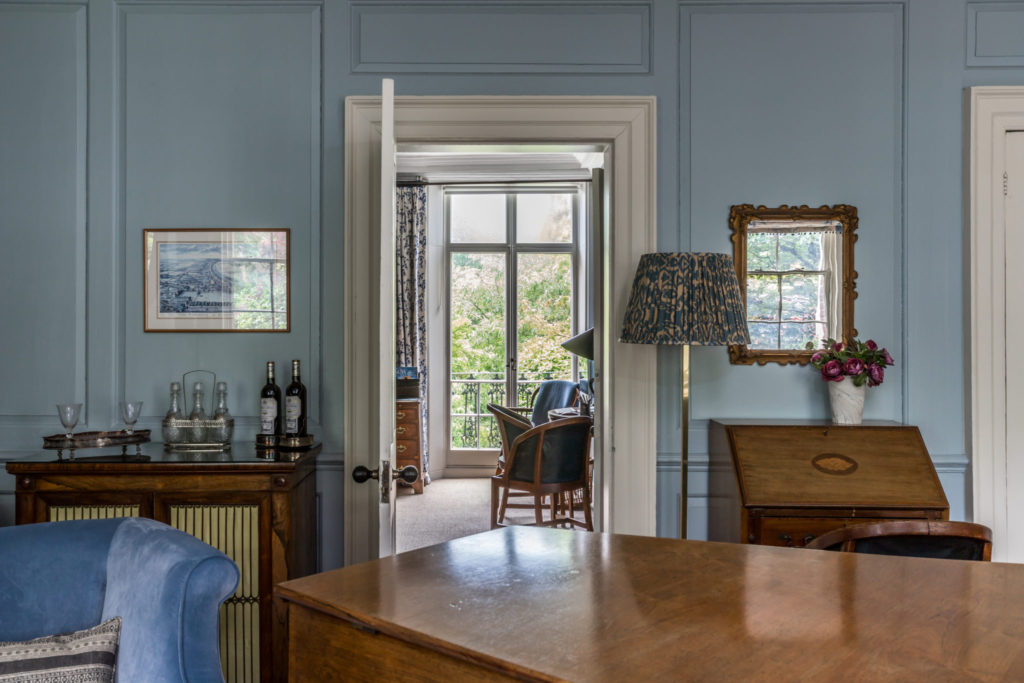 Moving through into the adjoining family room, we continued the blue and silvery colour scheme for a seamless transition. Both rooms benefit from the door between remaining open to make the most of the sense of space and the natural light. 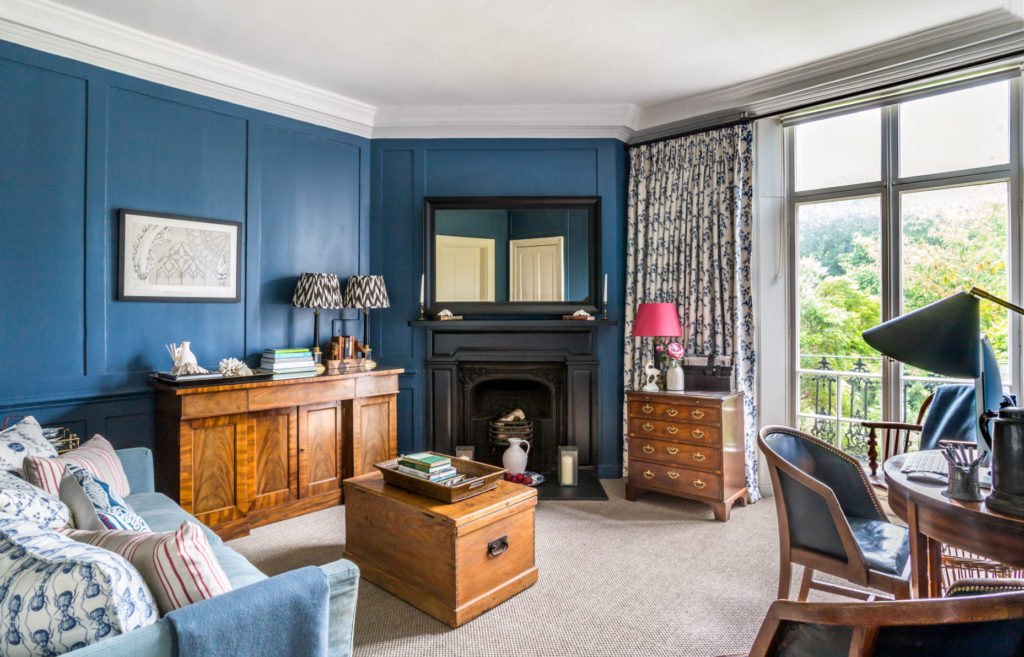 This is the place the family go to watch TV and our client catches-up with her paperwork. You can see her little desk to the right but the TV is harder to spot. A TV rarely looks good, but particularly in a period property. Here, we chose a TV from Frame TV that disguises it as a mirror.

The fireplace was painted it black and we chose a frame for the TV to match. 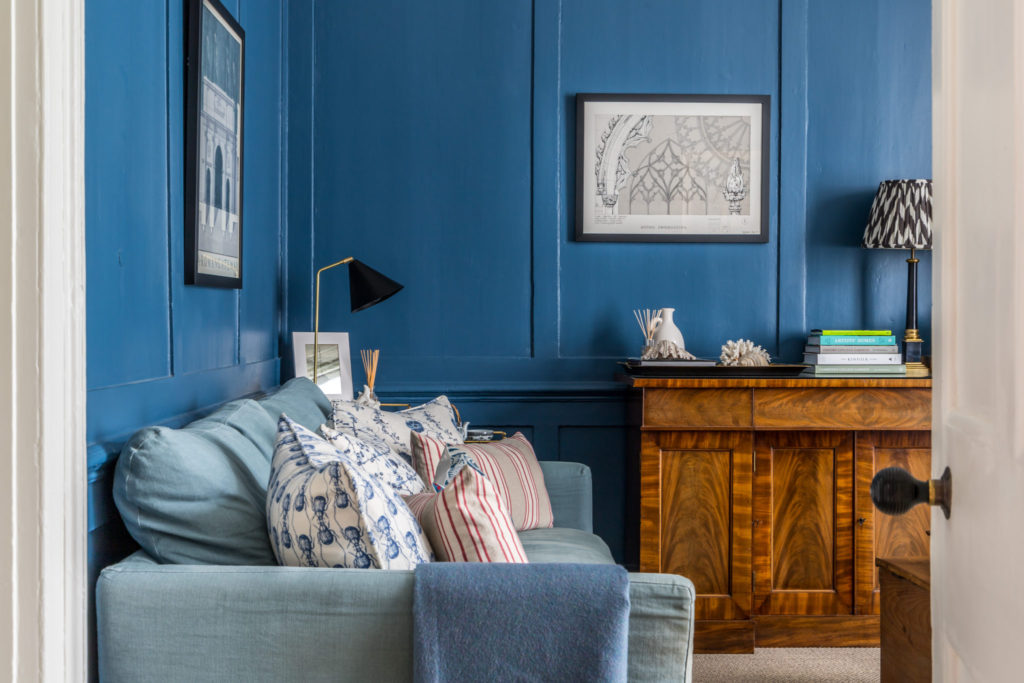 The walls had been painted an off white, which was probably selected because the room has limited light. But rather thank looking fresh and bright it looked dirty and grubby. We introduced a deeper blue which works much better with the level of natural light. Moreover, we added floor and table lamps to create pools of gentle light at night. 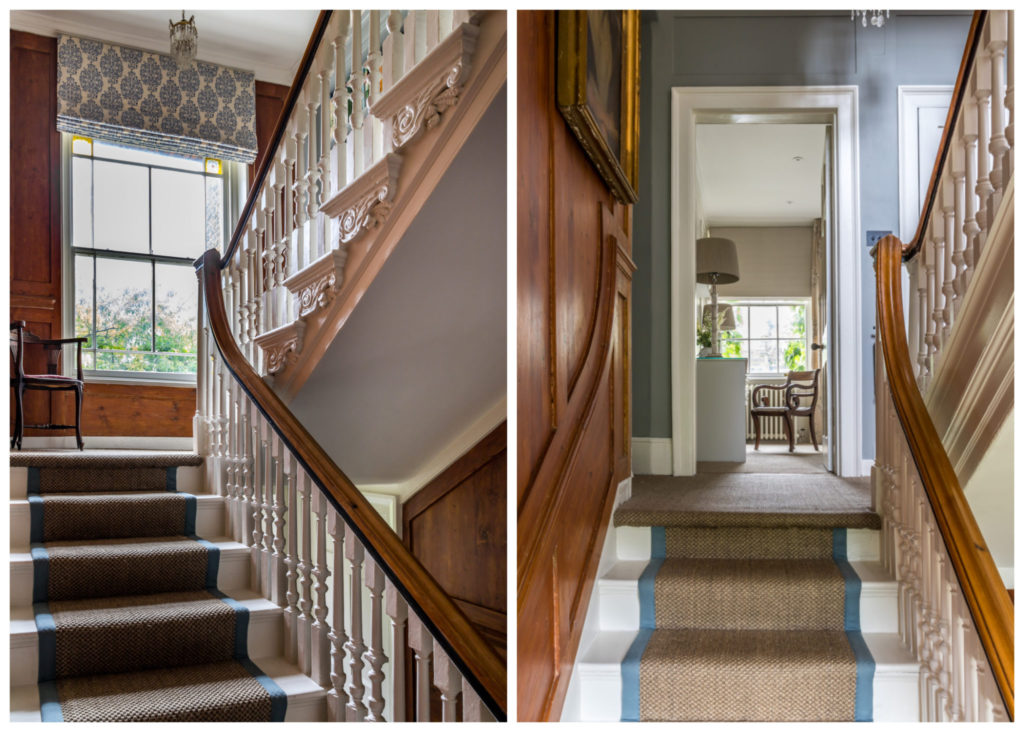 We took the natural sisal carpet we had laid in the family sitting room up the stairs and had it edged in blue to retain the link to the colour scheme. Complementary fabric was selected for the Roman Blind at the pause in the hallway. 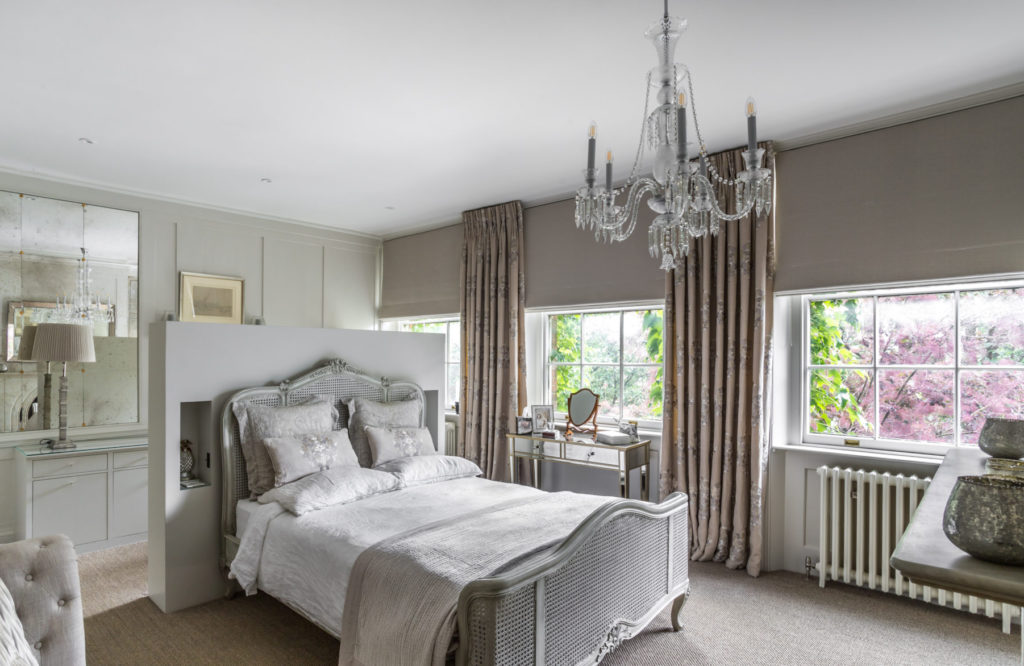 The carpet in the master bedroom was falling apart and full of moth and so we continued the natural sisal carpeting here also.

The walls had been painted an uninspiring, shade of salmon pink and our client wanted a more restful and romantic scheme. We picked up on the silvers that had played a secondary role in the ground floor rooms to create this fairy-tale theme. The glass chandelier, mirrored dressing table, antique glass and metallic details, reflect and bounce the light, adding glamour to the design 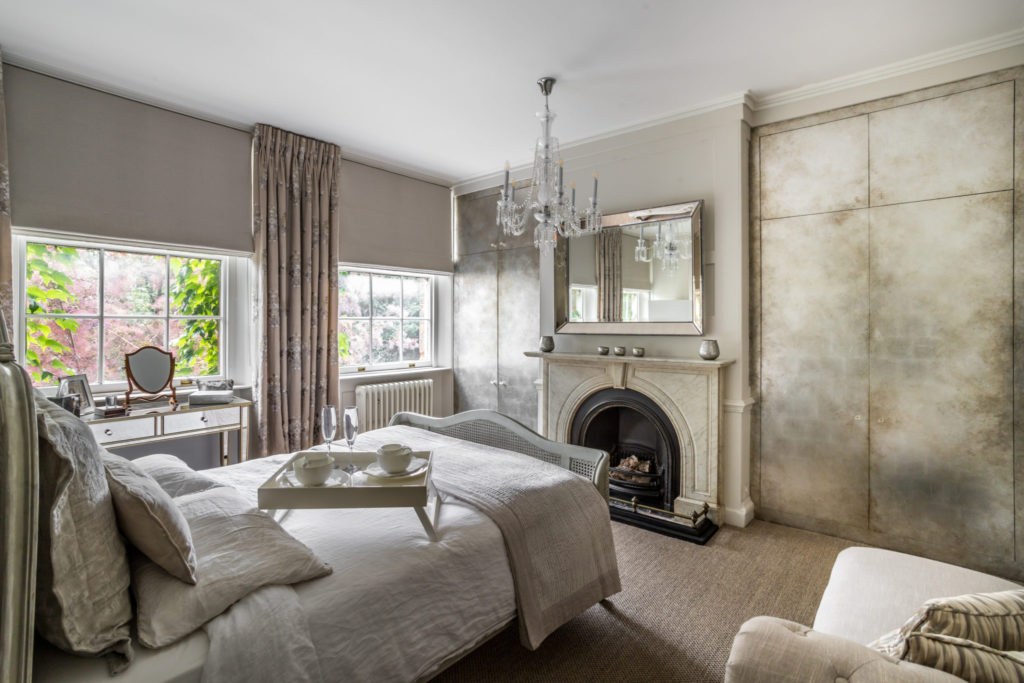 Our client had seen a shimmery, metallic paint effect in a magazine and was keen to use something similar for the wardrobe doors. We asked interior design specialist decorator, Hannah Eustace to create a similar effect, with a touch of taup, and more burnished metallic finish – and she really did a fabulous job. Couldn’t recommend her more strongly!

Again, the fireplace was restored. 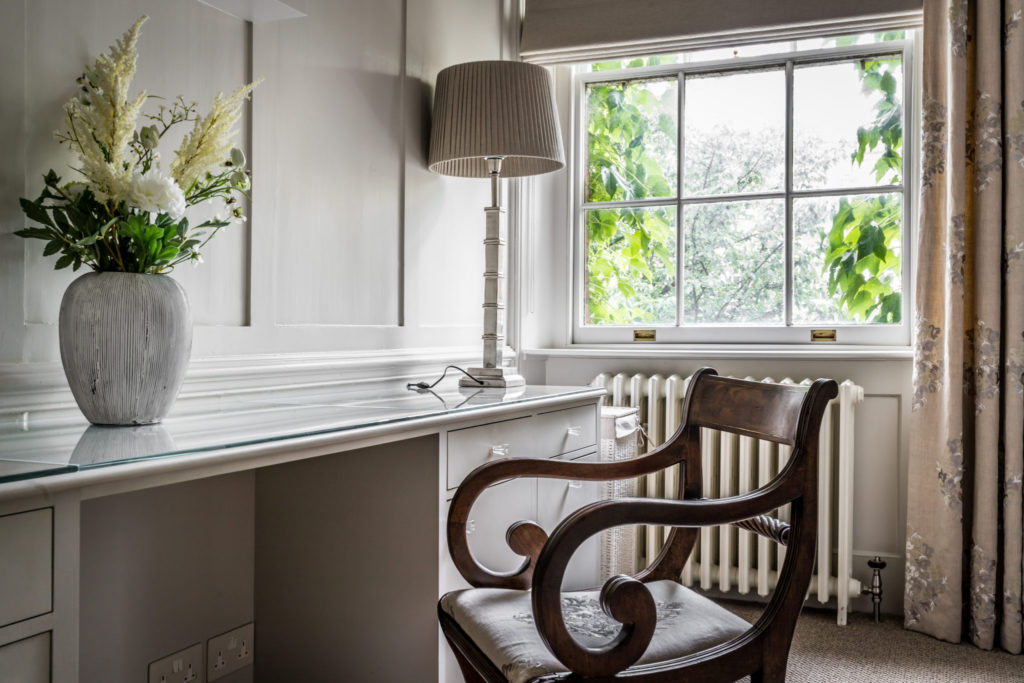 Our client and her husband both absolutely love this room. One of the challenges had been that our client’s husband had also wanted it to double as a space where he could work from home, which really was not a concept that was in-keeping with the idea of our romantic and restful dream scheme.

We achieved the desired result by putting the bedroom in the centre of the room. A false wall doubled as as a headboard whilst acting as clever screen, hiding the work area. The bespoke desk functions like any other but is decorated in-keeping with the bedroom scheme and enables the couple to hide any references to business at the end of the day. 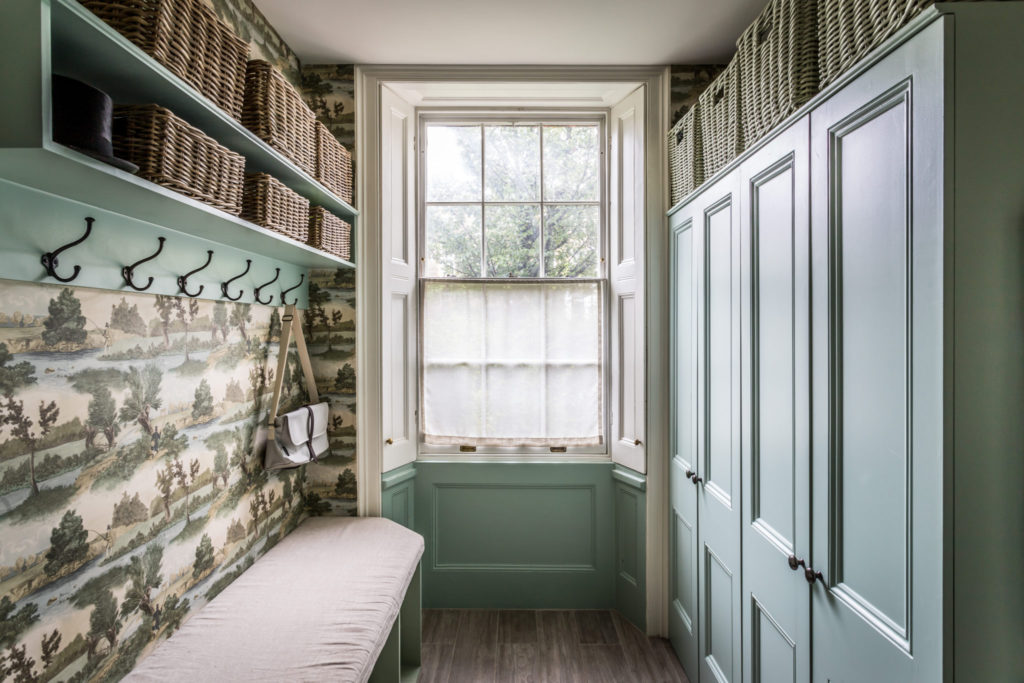 Back downstairs. The boot room was absolutely packed with stuff when we first began the project. Our client had to work very hard with a professional declutterer to free up space to enable us to begin the redecoration.

We built in new cupboards and redecorated with Lewis and Wood Fishermen wallpaper, a reminder of the nearby Thames, where our client likes to walk. The baskets are an attractive way of holding all the items her busy family and active dog need everyday. 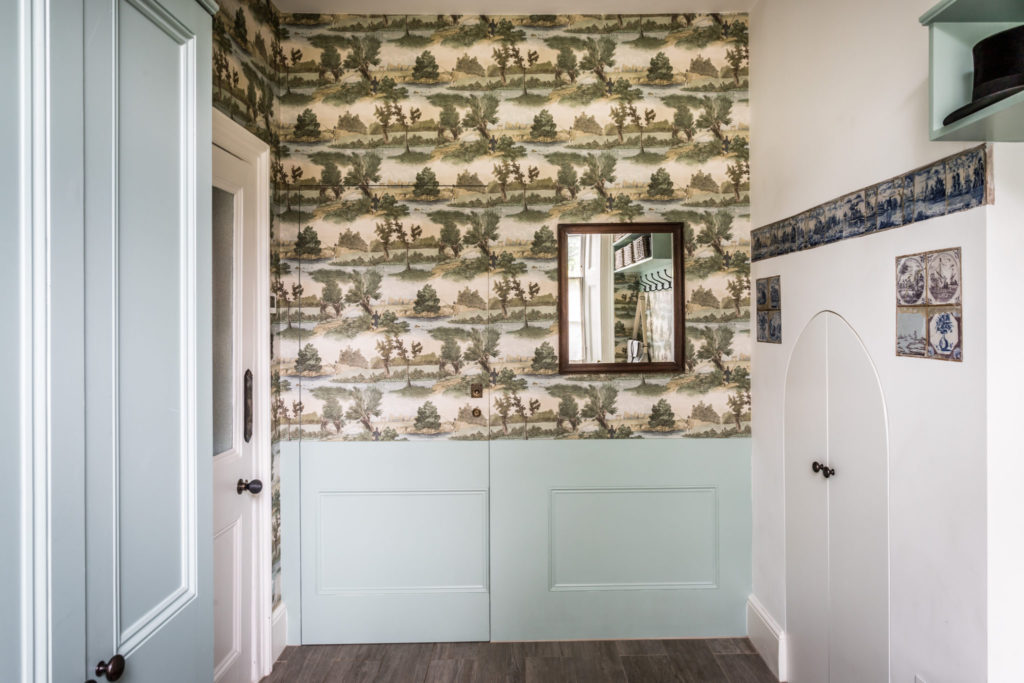 The little cupboard to the left was built in a niche in the wall and has become a useful coat cupboard. The Delft tiles are from the 16th century and were part of the first dwelling – a farmhouse that was developed by the Georgians and then Victorians to form this quirky property.

We built a false wall and added panelling to create a separate cloakroom. 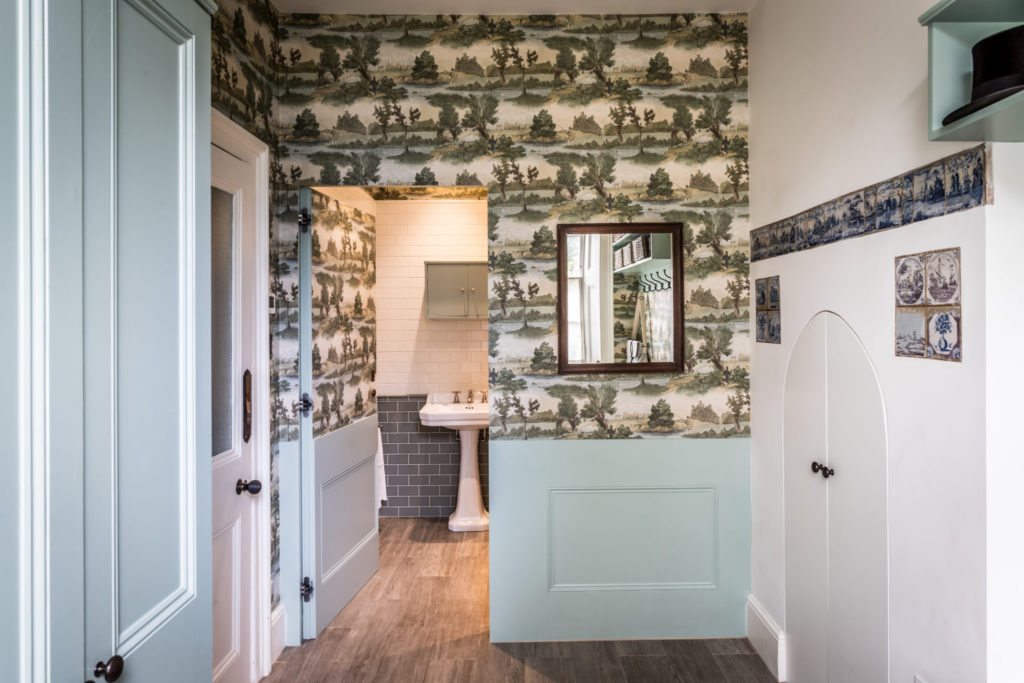 For further inspiration and ideas, you can find more of our featured projects here. If you have any questions or would like help with your project, please do not hesitate to get in touch, we would love to hear from you.